Do you need a trastator to a spanish version?

this game is really fun for people who would like a minecraft remake with the same idea. the materials and weapons are very similar and the gameplay is good enought o keep you playing until you win. the only thing that people would like is if you could save your progress when you die and respawn. maybe you coulde add something to get extra lifes so you dont lose all your progress. overall its very fun. 9/10 because of the save feature

I am love this game! it's very funny!

I am confused. what exactly is the talisman used for? and also i agree with Pablito. the boss is sooo unfair. there also should be different modes so that it isn't so impossible for a whole in the game

Nice game (except the boss monster which is totally unfair: completely unexpected, you can't backtrack and if you die you cannot reload). The REAL problem is that the game CRASHED twice! It crashed while saving (once autosaving, once when I explicitly saved). A command prompt appeared but I could not type anything. Sorry I forgot to take a screenshot. I reloaded the page in the browser (I'm using Google Chrome 80.0.3987.132 on Windows 10), I loaded the last saved game, it worked but I lost ALL my inventory! To add insult to injury, the first time I reloaded I was "magically" placed in the cave level OUTSIDE the walls, without tools. I restarted from scratch, I was very near to the endgame, I had all the benches, all the gem tools, and... CRASH, again, lost everything. I gave up :(

About the gameplay: I liked it, but the progression wood/stone/iron/gold/gem is too unnecessarily long and time-consuming. If I were you, I'd remove gold completely from the game and go straight from iron to gem, or maybe you could use gold for something else (after all, the idea that gold tools are better than iron tools is ludicrous EVEN for a game that has zombies and magic pockets).

Nice game, try my game "guardian of the galaxy " and help me to become a better developer ;)

So I mined everything in the area underground since I completed the game, except one diamond, stone, and iron. I wanted to have a zombie army, so I went out of the underground and came back, finding a ton of zombies that have spawned. So I gathered them all together, trying to kill them all. Every sweep of my gem sword made them go back 5 blocks! But then when I got to close to them, they one shot me and I died. I got the talisman and all the diamond tools, but I died to a horde of zombies. That's a funny ending in this game.

Also, I never made the boat* so lol.

Otherwise, I would say this game is GREAT and I love it.

*I made a boat beforehand when I played the game but I just left the map, because I thought you could just place down the boat and then sail away, like in Minecraft. But no.

I never fought the boss in the run I placed the boat on.

I have some ideas to update.

#1: Armor. It would give you defense or increase your HP.

#3: Another kind of potion, like a strength potion that temporally or pernamently increases the damage you deal, decreasing the time that you need to destroy anything.

a fan of your game.

how to get a artifact piece?

Fine,,, Use the map that could be made using the crafting table, use a diamond shovel to dig out artifact piece, if there is grass on the block, use a hoe first (any) and then use the shovel. Combine the artifact pieces at the factory.

This looks and feels like you really pushed the fantasy console to its limits. Good Job! 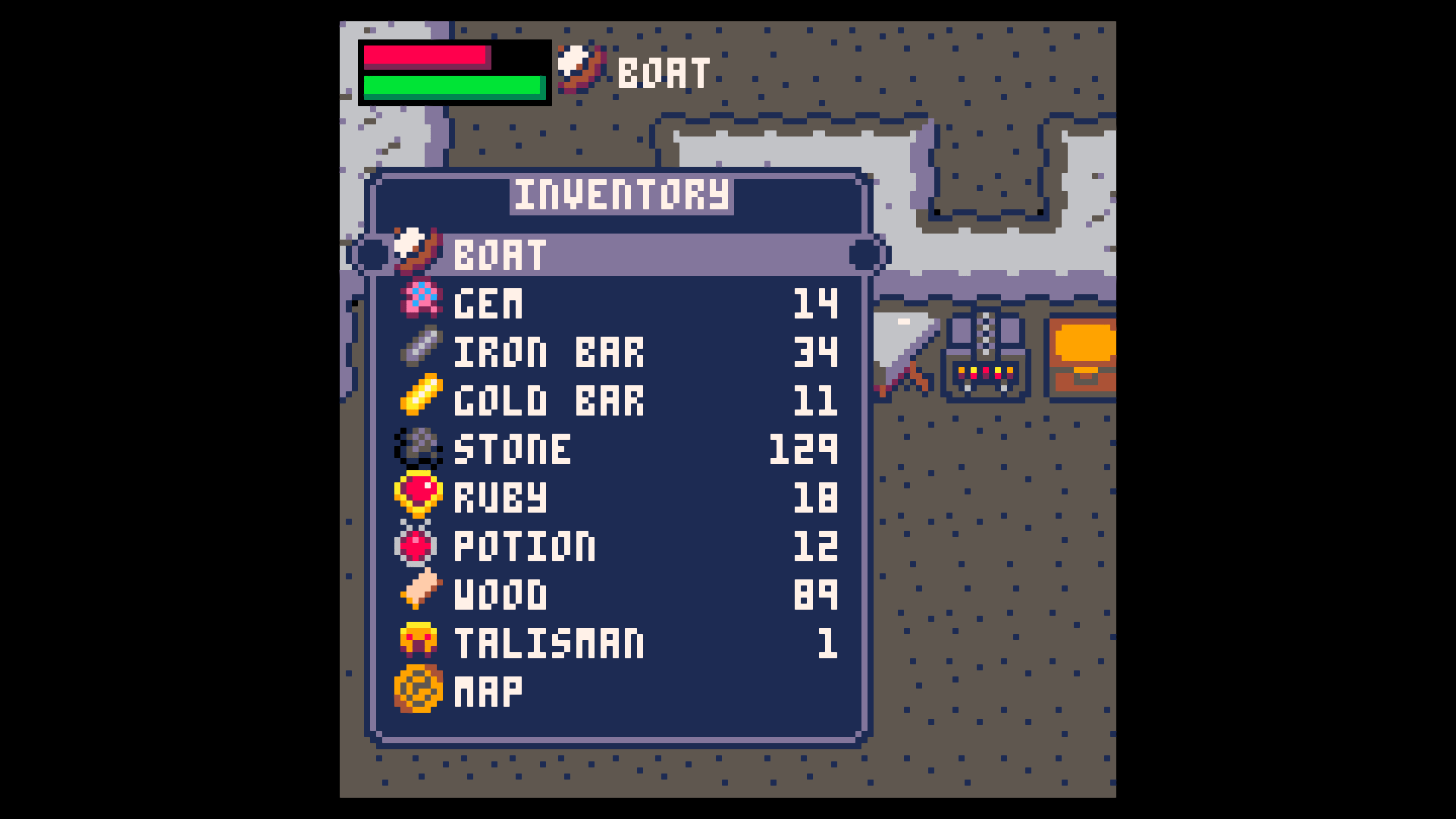 ok i'm done, but, why ruby and talisman ?

Can you make a save progress please?

Use the save disk? (but files get deleted if death occurs...)

I got into the giant sea eel area with only iron stuff. I died and lost my game. It's fun!!!!!

F in the chat for our gamers bois.

does minicraft ring a bell?

No, since bells are only in Minecraft. Lel

Overall a nice game with simple but good mechanics. In the main menu, there should be explained the controls scheme.
The object and pickups mechanics are awful, IMO. Why the items go flying away when you break something? Why have one to run like a headless chicken to pick up the items before they disappear three seconds after. The items shouldn't move at all when you break a block, OR at least they should stay longer. WAY longer. That's the only real complaint I have about the game.

The game is really good when you need a quick past-time,very simple gameplay, the controles might be hard for the first time but when you figured it out it gets easier!

I perssonally didn't beat the boss because its a bit too hard for me.
I hope to see more of that kind of content in my life.
Thank you!

Um, ever heard of  CONTROLS? I could get into this, if they explained the control scheme. Instead it just dumps you into a game. Just trying to figure out how to navigate the main menu is a bit of a nightmare. They don't use the classic WASD for movement making it odd to operate the Up Down Left Right controls on a computer. Plus you have to figure out pretty much EVERYTHING. There's no telling if you hit the right button to do a certain action since it's pretty much random on what controls what. If there was a menu that let you shift control schemes like pretty much every PC game out there now, I wouldn't be complaining...but instead, I'm left with this game that is pretty much unplayable at this point of time. Hopefully the graphics and controls are worked on in a future update. For now though, don't jump into this game. Let it be developed a little more, that is my review. Jump in once it gets a little more developed and fixed so you can enjoy it for what it is...A top down Clone of MineCraft

Normally I would leave something like this alone BUT, although yes this could be good constructive critisism, try to keep in mind that this was made with the PICO 8. This fantasy console is SUPER limiting. Now I don't know how much code the creator has left to even attempt to add more explanation about controls or add new features. But the PICO 8 also purposly limits game size and controls. The creator probably doesn't have enough space left to add some of the things you are implying. The graphics are also purposfully limited by Lexaloffle (Creators of PICO 8) . To add all of the things you would want to add/change would mean a complete rework or even moving to a new engine. This takes *forever*. Also this was made heavily inspired by Minicraft, also made by Notch, and this is admited by the creator of this game himself.

What does the Helmet thing do?

I would need some help.

Hello, to get wheat, you need to use your scythe on grass to get some seed and use your shovel on sand to prepare the ground. Once the ground prepared, you can plant the seed (use seed on prepared ground) and if you wait a bit until the plant become yellow, you can then use your scythe to harvest the plant, giving you wheat. It's useful to make healing bread.

For the map, you can finish the game without it, but it's useful so that you doesn't get lost, and also to find the entrance to the cave. There is also 4 red locations on the map that you can go dig to find something that could help you against the final boss.

Have fun with the game!

You mean Artifact Pieces? If not, then what?

Yes, it is the artifact pieces. Combine them at the factory to make a tailsman

why cant i save

Does anybody know how to plant and farm seeds?

use shovel on sand. then plant seed there. wait and harvest with scyte! :)

Use scyte on grass to get seed.

I tried to save and I got this screen. And I can't get it to go away 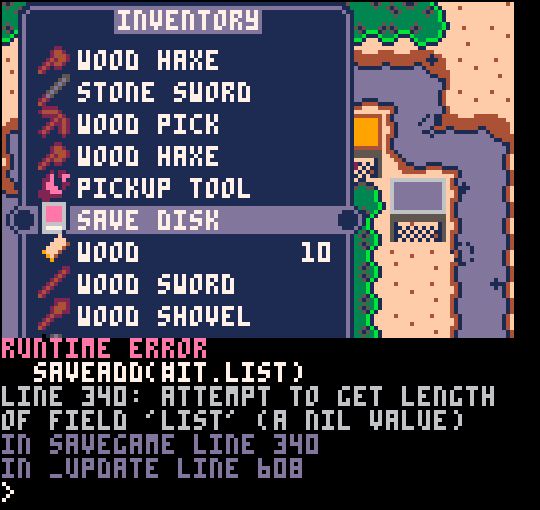 OMG i found the artifact piece and i found out how to plant whear btw. Hint the artifact has something to do with farming

I somehow cant figure out how to plant seeds? Can you plsease help me

Hello! Your game is super fun! We were wondering if you would want us to localize the game into Portuguese. On our page you have all the details about us!

Keep up the great work 💪

its sooo hard and soo fun at the same time

maybe i just suck at it idk lol

Great little game, couldn't figure out how to install minicraft, was a bit annoyed, then I found this. Pretty much the same, it seems. I really love that music aswell, it's really good. The game is quite fun, will be playing this a lot.

So, how do I load my save files?  It seems to be saving, but I cannot load them once I have something saved.

Hi! If you restart the game, a load option should appear along the new game option on the title screen. But the game is permadeath, so if you die your save is deleted. Sorry if you lost progress.

Ahhh, that would be why. I never checked until after I had died.

This game is amazing