P.Craft is a crafting game made using Pico 8. You wake up on a deserted island, and you have to survive. Gather materials and build your tools. Explore the area and find a cave. Will you find a way to escape the island ?

Clic on the game to give it focus if buttons doesnt work.

Update : Deluxe edition with save system, a boss and a few new items to discover.

found an error trying to save. 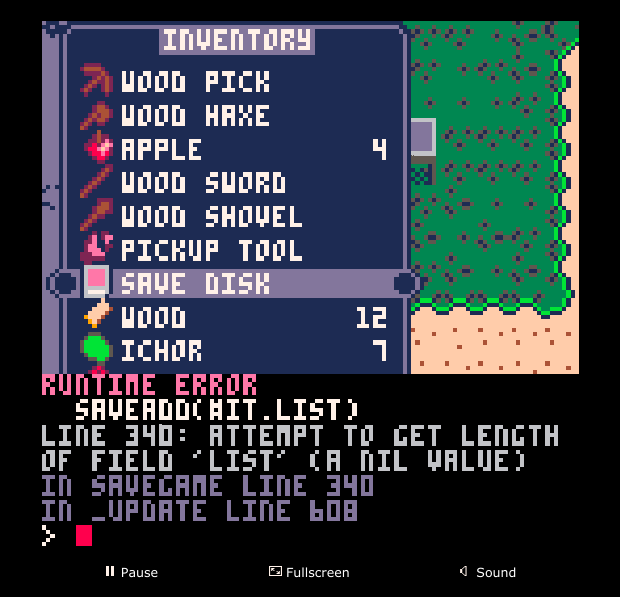 its very good and cool and RAGEING

Its a great game for low end hardware, i never expected it to be so fun, terreria is lame... thisss is what will replace it i guess. good job, gonna try pico 8 ,never heard of it, an android release could be a game changer... overall an amzing game thats really underrated! i usually write reviews for games that deserve it,and i write a ton. graphics are nice and nostalgic, and isnt intense till it creates lagz. this is where this review ends. hope this game gets fame and liked.

I really enjoyed the game. Quite addicting. Great concept and execution. A suggestion would be to add more islands to either start on or advance to later in the game. But besides that the game is great 5 stars.

Amazing game, i love it. But boss killed me. What the pity)

Great game, don't know how to farm yet tho... all I can do with a shovel is dig the dirt, how do I prepare it?

Nvm, it's just that you need to use a wooden shovel and I went to gem immediately

The game is great but the surface's music is annoying.

great game, wished i had money to support it

i found the boss

i got so far almost built the boat and

I wish I had money to donate :(

Amazing game! I hope to see more games like this in the future!

how do you place seeds/farm? Also, cold you possibly add a respawn function, where when you die, it brings you back to the last save. And last thing, can you PLEASE turn down the item drop bounce, as its really annoying, and it takes away the precious time it take to pick it up

this game is amazing great job

can you make this game downloadable for chromebooks?

I really really love this game, but the saves don't work!! I want to get further than making a stone workbench but it's too much to go through the grind every time :

WHY I LOSE EVERTHIMG WHEN DIE

you lose everything because it's a survival game, that's how those games work.

this game is awesome

Let me just say, this is an amazing game. I love it. I did stumble across a problem, though. My game had an error when I tried to go down into the second level of the dungeon opening, and it crashed. I reloaded the page, and pressed load game. When it opened up, you might think, "Oh his game restarted and he is complaining," but NO. I had every single item in the game in my inventory. That kind of took away some of the fun and you might want to fix this.

did u take a screenshot?

Do you need a trastator to a spanish version?

this game is really fun for people who would like a minecraft remake with the same idea. the materials and weapons are very similar and the gameplay is good enought o keep you playing until you win. the only thing that people would like is if you could save your progress when you die and respawn. maybe you coulde add something to get extra lifes so you dont lose all your progress. overall its very fun. 9/10 because of the save feature

I am love this game! it's very funny!

I am confused. what exactly is the talisman used for? and also i agree with Pablito. the boss is sooo unfair. there also should be different modes so that it isn't so impossible for a whole in the game

Nice game (except the boss monster which is totally unfair: completely unexpected, you can't backtrack and if you die you cannot reload). The REAL problem is that the game CRASHED twice! It crashed while saving (once autosaving, once when I explicitly saved). A command prompt appeared but I could not type anything. Sorry I forgot to take a screenshot. I reloaded the page in the browser (I'm using Google Chrome 80.0.3987.132 on Windows 10), I loaded the last saved game, it worked but I lost ALL my inventory! To add insult to injury, the first time I reloaded I was "magically" placed in the cave level OUTSIDE the walls, without tools. I restarted from scratch, I was very near to the endgame, I had all the benches, all the gem tools, and... CRASH, again, lost everything. I gave up :(

About the gameplay: I liked it, but the progression wood/stone/iron/gold/gem is too unnecessarily long and time-consuming. If I were you, I'd remove gold completely from the game and go straight from iron to gem, or maybe you could use gold for something else (after all, the idea that gold tools are better than iron tools is ludicrous EVEN for a game that has zombies and magic pockets).

You can mine gems using iron, I completely did not get the gold at all. Wood, stone, iron, then diamonds, like in minecraft. It's possible in the game to even mine gems using stone tools, since there wasn't any code for required types of pickaxes to mine the gems. Also, the boss isn't totally unfair, just stack on some regen pots and the tailsman, keep your distance from the boss when active, and you complete the game! Check my post below to see how I won the game!

I dedided to give it another shot and this time I completed the game and luckily it did not crash. This time I skipped the boss, I'll try next time :)

You're right, gold can be skipped... but then why it's in the game?

idk, it probably is an addition to the game, like people can get it, but it isn't necessary. I think gold is used for healing tho?